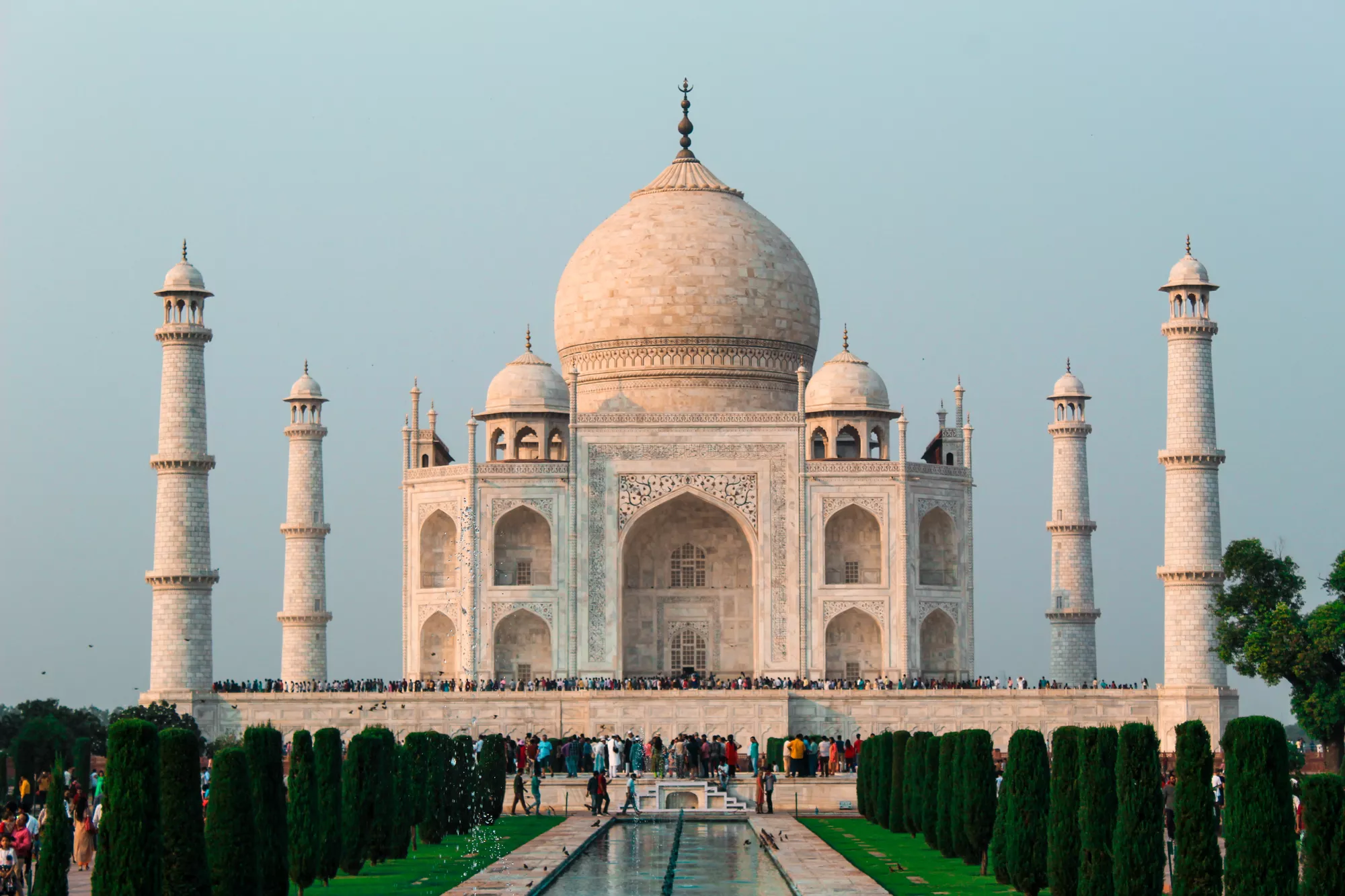 Traveling offers valuable learning experiences for kids. However, planning a trip abroad can also be very expensive—plus, in the midst of the COVID-19 pandemic, visiting other countries might be a health risk. Whether you’re itching to get out and see the world or just stuck inside with kids on a rainy day, virtual travel may be an idea worth exploring.

Popping on a virtual tour is a great way to simulate a vacation visit to any number of tourist attractions. This is something parents can do with their kids OR babysitters can do with kids under their care -- especially on long babysitting jobs, where kids and parents will expect their babysitter to have a variety of activities planned.

Travel can be a great bonding activity, and educational to boot. Showing kids the wonders of the world is bound to delight parents and babysitters alike (oh, and the kids too!). Here are a few interesting global landmarks to check out virtually.

Situated on the banks of the Yamuna River in Agra, India, the Taj Mahal is a world-famous Mughal-era mausoleum complex. Built between 1631 and 1648 C.E., the monument was commissioned by the emperor Shah Jahan to serve as his wife Mumtaz Mahal’s resting place. It spans 42 acres and consists of five structures: the main gateway, the mosque, lush gardens, a rest house, and the main tomb.

The tomb, which houses the deceased emperor and his wife, is the crown jewel of the complex. The structure is made of pure ivory marble, and the tombs inlaid with precious stones from Sri Lanka, China, and Tibet.

Today, the Taj Mahal is visited by nearly three million tourists a year, and is considered one of the greatest examples of Indo-Islamic architecture. You can have a virtual travel experience at this landmark with this tour of the Taj Mahal.

The Eiffel Tower is a wrought iron lattice tower located at Champ de Mars in Paris, France. Known locally as the La dame de fer or Iron Lady, this Parisian landmark was built for the 1889 Exposition Universelle to commemorate the centennial of the French Revolution.

Standing at 1,063 feet tall, the Eiffel Tower is by far the tallest structure in the city. At its top, visitors can explore the restored office of Gustave Eiffel (who designed the tower) and panoramic maps of the city. There are also two floors of viewing decks with some of the best aerial views of Paris.

While the structure was initially met with criticism, the Eiffel Tower has certainly outlasted its naysayers. Today it is one of the most-visited monuments in the world. The tower also serves an important role in broadcasting and communications, due to the 70-foot antenna added in 1957.

Take a closer look at this modern architectural wonder by checking out this virtual tour of the Eiffel Tower.

3. The Colosseum in Rome

The Colosseum is an ancient Roman wonder nestled in the heart of Rome, Italy. With a perimeter of 1,788 feet, the structure is the largest ancient amphitheater ever built. Upon completion in 80 C.E. under the Emperor Titus, it became the central site for all manner of public spectacles, ranging from gladiatorial combat and executions to naval reenactments and bullfights. Despite centuries of damage from natural disasters, looting, and neglect, the structure remains an iconic symbol of imperial Rome.

Today, visitors can take walking tours of the Colosseum and see highlights such as the Arch of Constantine, the Colosseum Upper Tiers, underground passageways, and the Hypogeum (arena floor). Learn more about this historical landmark in this virtual travel experience of the Colosseum.

Petra is a Nabatean caravan city that sits amid rugged desert canyons between the Red and Dead Seas in Jordan. Petra served as a trading center for goods coming from China, India, and Mediterranean countries—the cross-cultural implications of which are evident in the blend of Nabatean and Greco-Roman architecture carved into the pink sandstone. The true wonder, however, is the ancient city’s innovative water management system, which consists of vast networks of cisterns and reservoirs to conserve seasonal rains.

Dubbed “the Lost City,” the site has been inhabited on and off since 7000 B.C.E., but was only introduced to the modern Western world when Johann Burckhardt rediscovered it in 1812. Petra currently remains one of the world’s most famous archaeological sites.

To see more of this ancient city check out this virtual tour of Petra.

5. The Pyramids of Giza

The Pyramids of Giza stand in the Giza Necropolis in Egypt. Constructed over 4,500 years ago, these relics of the Bronze Age Old Kingdom serve as tombs for the Pharaohs Khufu, Khafre, and Menkaure. The most well-known structure of the three is the Great Pyramid, or the Pyramid of Khufu. Rising 481 feet above the desert, it is a wonder of its time—indeed, a wonder for centuries after too! The walls inside the pyramid are adorned with art depicting ancient Egyptians working the fields, fishing, and building, as well as ancient spells and afterlife rituals.

To get a first-hand virtual travel experience, check out this this tour of the Pyramids of Giza.

Yosemite National Park is a large expanse of wilderness with meadows, granite cliffs, sequoia groves, glaciers, and other landforms and bodies of water. Located in Northern California, its 748,436 acres serve as home to over 160 rare flora and 250 species of animals.

The park was first protected in 1864 and an official World Heritage Site. Over the years, its become a go-to for hiking, rock climbing, and camping destination. In colder months, many locals also enjoy winter activities like skiing and snowshoeing.

To learn more about the different wildlife or simply marvel at the park’s vistas, take a look at this virtual tour of the Yosemite National Park.

Easter Island (Rapa Nui) sits at the southernmost tip of the Polynesian Triangle. While gorgeous in its own right, the island’s claim to fame stems from the colossal stone statues called moai scattered across the island. Scientists think the moai date back to somewhere between 1100 and 1680 C.E., each representing the deceased head of a particular royal lineage.

Inhabitants of the island likely carved these structures by hand from solidified volcanic ash from the Rano Raraku volcano. Over 880 of these stone statues have been found and inventoried so far.

Aside from the giant moai, Easter Island is also known for its petroglyphs. Currently  4,000 petroglyphs cataloged at over 1,000 sites on the island, making Easter Island the most extensive collection in Polynesia.

To see more of what this island has to offer, take a look at this virtual tour of Easter Island.

Virtual tours are a great way to keep young minds busy. Kids can explore interesting places and artifacts, and widen their cultural perspective—all without spending a dime on airfare and accommodation.

However, you don’t always have the time to explore the world with your child, even if it is just from the couch. This is where a professional, vetted babysitter from Nanno can help. Nanno is an all-in-one babysitting service for both last-time and more regular childcare needs. You can be sure that your kids have a fun and educational time with activities such as virtual vacationing while you’re away. Sign up and give it a try today!

About Wynona March
Seattle, WA
Wynona is a writer and mom, with three children under age 6 and a penchant for crafting. She loves guiding her kids through projects of all kinds, from cooking to crafting to building a better robot.
Previous Post : Top 7 Apps for Finding a Sitter   Next Post : 10 Great Recipes You Can Make With Kids While Babysitting