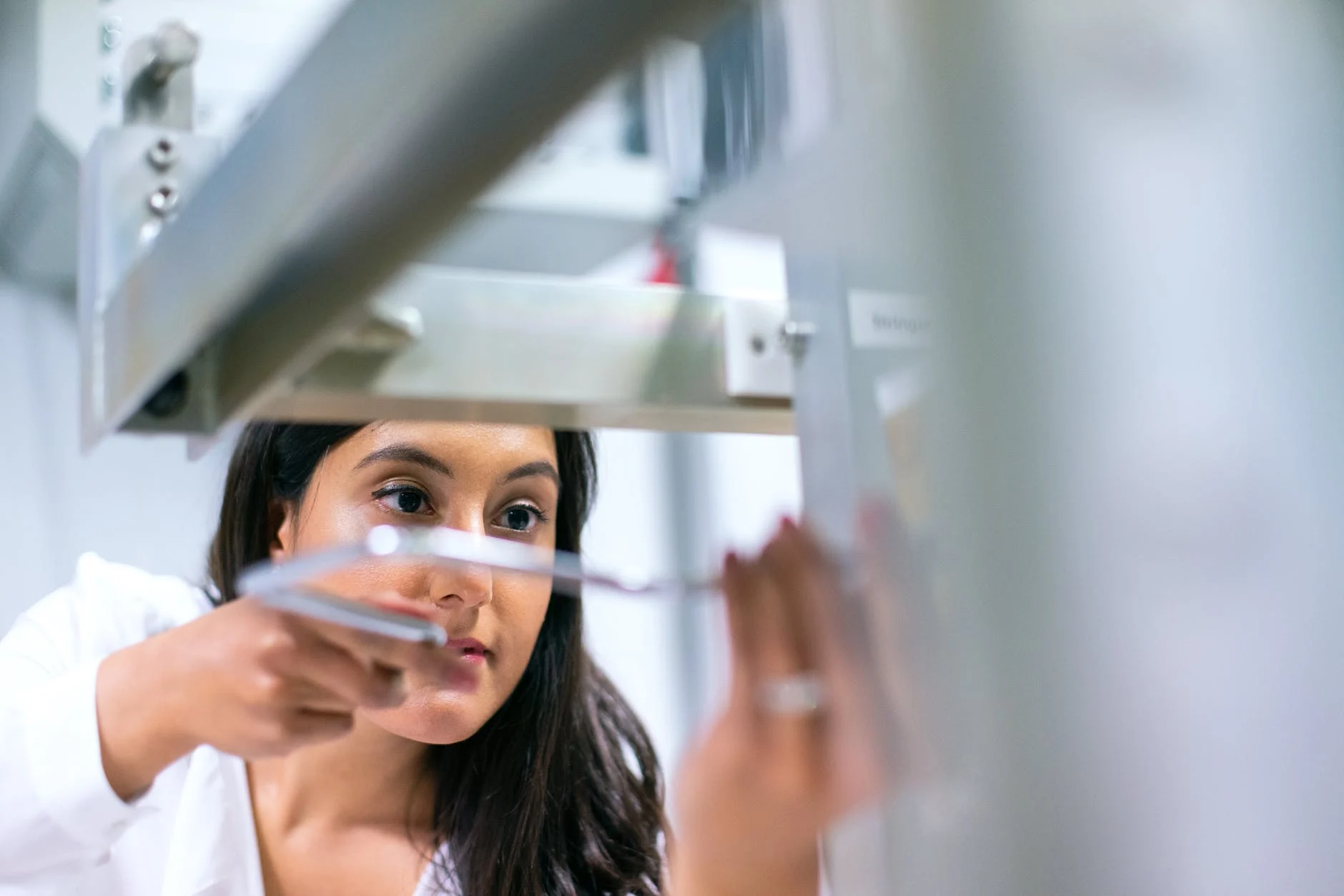 Women have revolutionized the field of STEM. This Women's History Month, learn about four of the most iconic women in the field throughout history.

March is Women’s History Month. As such, it’s the perfect time to celebrate women from all over the world! Women have made waves throughout history in every field, and it’s important to recognize our achievements—especially this time of the year. For the entire 31 days of the month, schools, daycares, and home childcare centers center activities and discussions around women’s history.

The STEM—science, technology, engineering, and mathematics—field, in particular, has been fundamentally shaped by iconic women throughout history. Considering how male-dominated STEM is (in fact, only 28% of researchers around the world are women), this is a particularly impressive feat. Despite the massive gender disparity in the field, we consistently manage to disrupt and revolutionize science and technology.

The first official celebration of women’s history took place in Santa Rosa, California in March 1978, organized by a group of educators who wanted to highlight women’s contributions and accomplishments. This annual commemoration became known as Women’s History Week. In 1987, Congress passed a resolution acknowledging the occasion and expanding it to cover the whole month of March!

Women are the unsung heroes of society: we juggle careers and families on top of professional responsibilities and our interior lives, often doing multiple peoples’ worth of work without receiving much recognition. This month is all about highlighting our contributions to society and encouraging other women to pursue their dreams and aspirations.

To commemorate Women’s History Month, it’s only fitting that we pay tribute to these four women—among many—who have changed the game in STEM, and the way we view the world.

Perhaps one of the most prominent female figures in the history STEM studies, Marie Curie’s career reads as achievement after achievement. She coined the term “radioactivity,” discovered two new elements, and became the first woman to ever win a Nobel Prize—and the first individual to ever bag the Nobel twice.

Marie Sklodowska was born in 1867 in Warsaw, Poland (then part of the Russian Empire). Her academic talents were obvious at a young age, as she earned a gold medal in academics after finishing her secondary education. Women in the empire could not attend universities, so Marie and her friends created the “Floating University” instead. This secret organization was a practice in self-schooling: the women would educate each other, as if in a proper classroom. Marie also began working as a private tutor at this time.

Eventually, Marie moved to Paris and enrolled at the Sorbonne as a physics major. It was during this time she also met Pierre Curie, whom she married shortly after. Together, the duo accomplished some of the greatest scientific research of the age. Even more remarkable were Marie’s personal achievements: a coveted fellowship, two university degrees, and a published paper. To top it all off, in the midst of all these successes she also juggled motherhood, raising their daughters Irène and Ève.

The Curies’ research centered on the sources of radioactivity—in fact, Marie coined the term. She also eventually discovered the elements radium and polonium. These achievements won the Curies the Davy Medal from the Royal Society of London and the Nobel Prize for Physics.

However, tragedy befell the Curie family a few years later, when Pierre died tragically in a carriage accident. Marie took over the research for both of them, while also caring for her two young daughters. Despite the tremendous responsibility and grief on her shoulders, Marie defied all odds and continued to pursue her research. She later published the Traité de radioactivité, earning her a second Nobel Prize—this time in Chemistry.

You’re almost certainly reading this article on a computer, right? Well, you can thank Ada Lovelace for that innovation! Widely considered the first programmer, Ada Lovelace was the first individual to write the first computer algorithm. Her work writing commands for Charles Babbage’s mechanical computer pushed the device beyond basic calculations, setting the early groundwork for most of the technology we depend on today.

Ada was born into aristocracy, as the only legitimate daughter of the poet Lord Byron. However, she was raised predominantly by her mother, the mathematician Lady Anne Byron, who encouraged her interest in mathematics and science. The Byron women were somewhat ahead of their time, as ladies of the era were generally pushed toward subjects like art, music, needlework, and French. Ada showed a knack for numbers, however, and was one of the most well-regarded mathematicians of the age.

When she was 18, Ada met Charles Babbage, who instantly noticed her talent in mathematics. She worked with him in conceptualizing the Analytical Engine and developed the algorithms to run the device. Her research also prompted her to believe that mechanical computers could be used for music and graphics in the future. She sure was right!

In addition to all of her achievements, Ada was also a wife and a mother to three children. Her passion for numbers never waned, and she balanced her responsibilities and aspirations admirably.

It’s hard to imagine life without the instantaneous communication of the internet. It’s embedded itself so deeply in our lives that it’s hard to go without! Much of this digital innovation is thanks to the work of Radia Perlman, sometimes referred to as “The Mother of the Internet.”

Born in 1951 in Portsmouth, Virginia, Radia grew up in a STEM-centered household. Her mother and father both worked as government contractors, and they encouraged her mathematic inclinations and academic talent. Eventually, Radia took an interest in computers and pursued a career that revolutionized the world as we know it.

Three of Perlman’s inventions, in particular, have been key in shaping the internet as we know it today: the Spanning Tree Protocol, TRILL (transparent interconnection of lots of links), and Link-State Routing. These innovations paved the way for smoother, more seamless communication over the Internet and the development of cloud technology.

Like Lovelace and Curie, Perlman is also a mother. She and her IT engineer husband have a son and a daughter. Juggling parental responsibilities alongside a career in the fast-paced world of STEM is no easy feat!

Credited for inventing the first compiler and coining the terms “bug” and “de-bug,” Grace Hopper made many significant contributions to computer science. She was also a vital member of the United States Navy, serving for over forty years.

Grace wanted to develop computer code that could function similarly to English, so computer scientists and developers would not need to use machine code to write programs. This led to the development of COBOL, which still functions today as the universal language for business coding. Grace revolutionized the way computers read code.

Grace retired from the Navy in 1986, but she still dedicated her time to refining and developing computer software. Throughout her career, she won multiple awards for her contributions to the field of computer science, as well as her service in the Navy.

The stories of these four iconic women in the STEM field are inspirational, and they show that women can hold their own and flourish in male-dominated fields. Marie Curie, Ada Lovelace, Radia Perlman, and Grace Hopper are just a handful of the women who have changed the world as we know it, showing that we really can have it all!

Of course, these women were not without help. They all relied on some kind of support system to juggle their many responsibilities, allowing them to achieve their dreams and accomplish great feats. Women have the strength and power to do anything they want to do. However, it’s important to remember that you don’t have to do it all on your own.

The modern parent, just like these women, can both pursue their dreams and manage parental responsibilities at the same time.

Nanno can help you find high-quality, fully-vetted babysitters to give your little ones the care they deserve, while you change the world. With a rigorous vetting system and a network spanning most metro US regions, you can be sure there’s always a reliable, trustworthy sitter within reach.

About Stacy Calloway
New York, NY
Stacy is a former nanny and currently director of user success at Nanno. She loves to find fun new solutions to complicated problems. Fun facts about Stacy: She is the oldest of 8 children.
Previous Post : April Fool's Day: Harmless Pranks to Get Kids Involved In The Fun   Next Post : Full-Time Sitter for 2 Kids Needed in Forest Hills, New York